Could chemists be ready to ditch the venerable test tube, the very symbol of chemistry in the minds of many people? Maybe not quite yet, but Caltech's Jack Beauchamp is working on it.

Beauchamp is doing work in what he calls "lab-in-a-drop" chemistry, in which chemical reactions are performed within a drop of liquid suspended in midair through acoustic levitation.

Acoustic levitation works by creating areas of high and low pressure in the air through the use of ultrasonic transducers. These transducers act like tiny but powerful speakers that operate at a frequency above what human ears can hear. The sonic energy emitted by these transducers is focused in such a way that the high- and low-pressure zones they create form "traps" that can hold small objects in place in the air. An object placed in one of the low-pressure zones is held there by the high-pressure zones that surround it. An acoustic levitator of this sort can be constructed for about $75 from off-the-shelf parts using 3D-printing techniques.

In a new paper, Beauchamp and his colleagues describe the use of the technique to study how a skin-cancer drug works at a chemical level. The research, he says, represents the first successful use of acoustic levitation as a "wall-less" reactor in a detailed study of chemical reactions.

In the work, Beauchamp and his team coated a droplet of water with lipids, biomolecules that make up cell membranes. They then applied an anti-cancer drug to the droplet and used a mass spectrometer to "sniff" the chemical signature given off by the droplet as the drug reacted with the lipid when illuminated with a red laser pointer.

In the experiment, the researchers added a small amount of one of two lipids, cardiolipin and POPG (1-palmitoyl-2-oleoyl-sn-glycero-3-phospho-(1'-rac-glycerol)), to each drop of water. The lipids migrated to the surface of the droplet, where they organized to form a thin film that is similar in composition to the cell membrane of a living cell.

With the membrane established, a chemical called temoporfin was added to the droplet. Temoporfin, a ring-like molecule, is excited by red light. In this state, the temoporfin transfers energy to molecular oxygen, forming an excited electronic state that easily oxidizes molecules it comes into contact with, including those that make up cell membranes. This makes temoporfin useful as a treatment for some skin cancers. A doctor could apply the drug to a cancerous lesion and then illuminate it with red light, which easily shines through tissues. As the compound is illuminated and excited, it oxidizes vital cellular materials, including lipids, proteins, and nucleic acids, triggering cell death.

It was this cancer-killing process that Beauchamp wanted to study. "When you're doing this chemistry, you'd like to be able to carry out these reactions under conditions where you don't have any contact of the liquid with surfaces," he says. "We achieve this goal by performing chemistry in a levitated droplet."

The acoustic levitator allowed Beauchamp and his team to suspend in midair a 1 millimeter droplet of water containing a mixture of the lipid and temoporfin. The droplet was then illuminated by red laser light, exciting the temoporfin and causing it to oxidize the molecules of the membrane layer.

As this oxidation was occurring, a pair of high-voltage electrodes placed near the droplet pulled minute amounts of material off the droplet and into the sensor of a mass spectrometer, which provided readings that allowed researchers to deduce the molecular structures of compounds within the drop. By continually monitoring these readings, the researchers were able to see how the compounds on the surface became progressively more oxidized. By looking at these reaction products, Beauchamp says the research team could determine how the oxidation processes work.

"As far as I know, we're the only people doing serious chemistry this way, examining the kinetics and mechanism of the reactions involved" Beauchamp says.

Acoustic levitation could find use in other fields as well, he says. As an example, he cites the research of Caltech's Joe Parker, an assistant professor of biology and biological engineering who studies the symbiotic relationship between certain species of ants and beetles. Beauchamp says it would be possible to levitate an ant and a beetle in close proximity to one another and then use the apparatus to analyze the pheromones they emit.

The technique could have other applications as well. In collaborative studies with Caltech's John Seinfeld, Louis E. Nohl Professor of Chemical Engineering, Beauchamp previously revealed details of the complex environmental chemistry that leads to the formation of organic aerosols in the atmosphere in studies using droplets hanging on the end of a capillary. With the new levitation methodology, that capillary would no longer be required.

Funding for the research was provided by the Beckman Institute and the National Science Foundation. 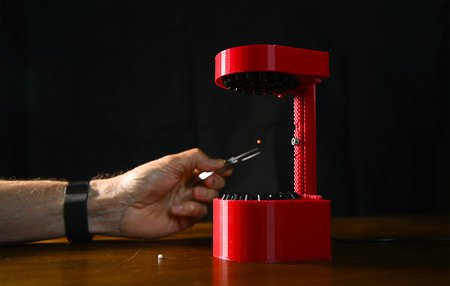 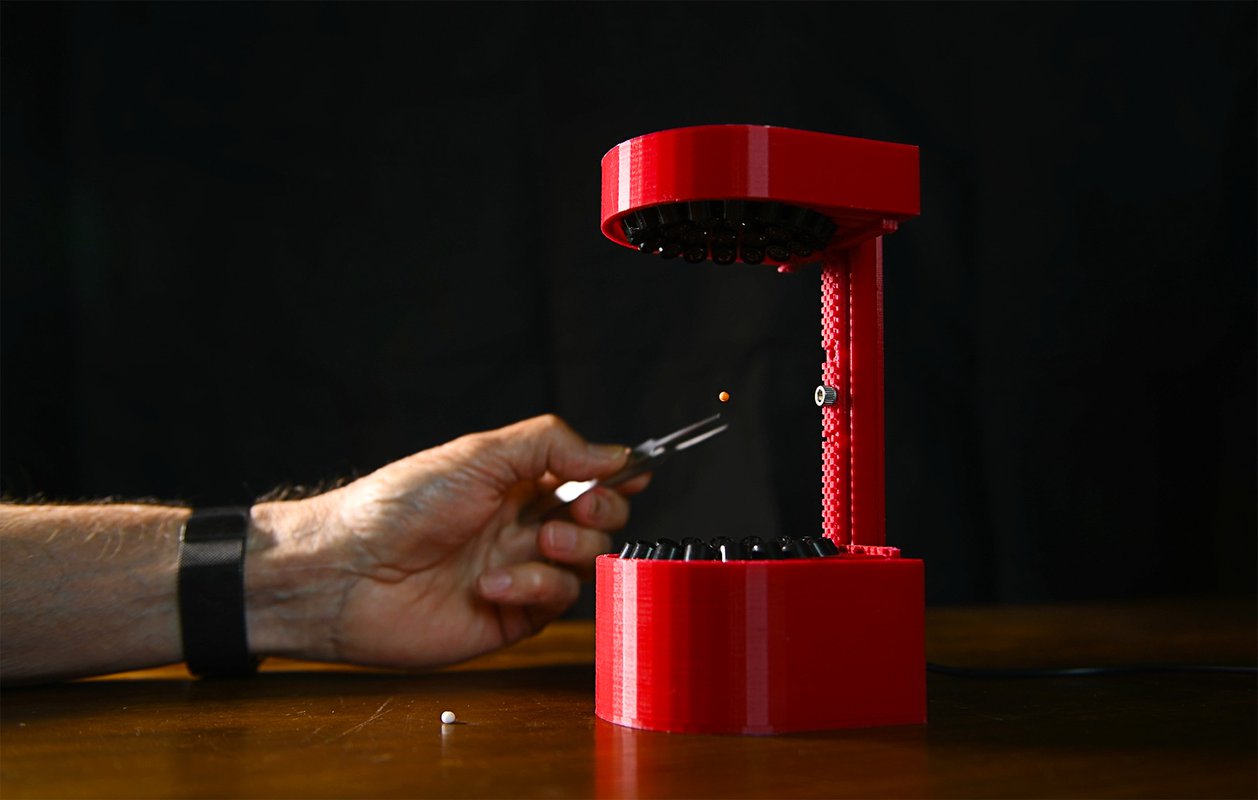