My work is aimed at understanding the molecular biology of two groups of small, enveloped RNA-containing animal viruses, the alphaviruses and the flaviviruses. In nature viruses of both groups alternate between growth in mosquito vectors and growth in warm-blooded vertebrate hosts, and this requirement for alternation in such different hosts has constrained their evolution in interesting ways. In addition to the inherent interest in the study of the biology, ecology, and evolution of these fascinating organisms, it is also important for human health that we better understand them because members of both groups contain important human pathogens. Diseases caused by them include encephalitis, poly-arthritis, yellow fever, dengue fever, among others.

The complete nucleotide sequences of many of these viruses are known, and for many of these viruses cDNA clones have been developed from which it is possible to recover infectious virus. This means that these virus genomes can be manipulated and mutagenized as DNA, and the resulting phenotypes of the RNA virus characterized. This has enabled the mapping of variants that differ in virulence or temperature sensitivity or sensitivity to antibodies, as well as the construction of new, defined mutants in order to identify the functions of virus genes during replication. By way of example, three aspects of current interest in the study of the alphaviruses are 1) The temporal control of viral RNA synthesis during the course of infection. The replicase is translated as a polyprotein which is processed by a virus-encoded enzyme. Both precursors and products play important roles in the virus life cycle, which can be modified by alterations in the processing enzymes, the cleavage sites, and mutagenesis of key residues. Cellular proteins also play a role in RNA replication, and the binding of specific host proteins is believed to activate viral RNA promoters. 2) The assembly of virions. The virion consists of a nucleocapsid composed of a single protein species and the genomic RNA surrounded by a lipid bilayer containing two integral membrane glycoproteins encoded by the virus. In contrast to other enveloped viruses, alphaviruses have a precise icosahedral structure. Using genetic and structural approaches we are investigating how this structure is assembled. 3) The nature of the receptors used by the virus to enter cells. Alphaviruses can infect many different organisms. What receptors do they use that enable them to enter mosquito cells as well as human cells?

The evolution and ecology of the alphaviruses also present interesting problems. We have found that Western equine encephalitis virus, a New World virus, is a natural recombinant between the New World virus Eastern equine encephalitis virus and a New World relative of Sindbis virus, an Old World alphavirus. We believe that alphaviruses arose in the New World and were subsequently carried to the Old World in two waves. One Old World introduction founded the group composed of Semliki Forest virus and its close relatives, and the other Old World introduction distributed the Sindbis-like viruses around the world. Our data suggest that this transfer occurred within the last 1000-2000 years, and we suggest that this relatively recent spread was accomplished by migratory birds. 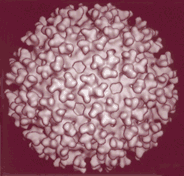 Surface of Ross River alphavirus, as reconstructed by cryoelectron micro-scopy to a resolution of approximately 25 angstroms, showing the spikes formed by trimers of the E1-E2 hterodimers.