The Neurobiological Study of Natural Behavior

The main theme of the Konishi laboratory is neuroethology which is the neurobiological study of natural behavior such as prey capture by owls and singing in songbirds. This approach requires close integration between behavioral and neurophysiological or neuroanatomical studies. We have been investigating the brain mechanisms of sound localization in barn owls which can use hearing to catch prey in the dark. The work over the past twenty years has led to a reasonably good understanding of the algorithm for the computation of sound locations in 2 dimensions. The barn owl provides one of the best examples in which sensory perception is understood at the level of neural pathways and circuits. Another advantage of working with owls is the possibility to combine theory and experimentation. This venture is well underway.

Few vertebrate neural systems that control well defined behavior are known. Birdsong is an exception, because it is controlled by a group of discrete brain areas. Young birds select the song of their own species out of many alien songs in their environments. To find the neural basis for this selectivity is one of our goals. Birds memorize a tutor song in youth and produce a copy of it at sexual maturity. We want to know where and how the song memory is encoded and stored in the brain. The development of the song control areas is another subject which we have been pursuing for many years. We are beginning to learn some of the principles that govern the differentiation of inter-connected areas in the brain. 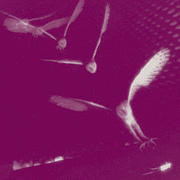