How a Small Protein Plays a Large Role in Mitochondrial Function

Caltech researchers have discovered an unexpected role for a protein in human cells, solving a longstanding mystery about how the composition of mitochondrial membranes is regulated.

Multiple studies have previously shown that mutations in the protein MTCH2 are associated with a wide range of disorders such as Alzheimer's disease, Parkinson's disease, and leukemia, but it has been unclear what exactly MTCH2 was doing to have such a major effect on the cell's function. This new work shows that MTCH2 is critical for the construction of a cell's mitochondria, specifically for carefully inserting proteins into the mitochondrial outer membrane.

The research was conducted in the laboratory of Rebecca Voorhees, assistant professor of biology and biological engineering and a Heritage Medical Research Institute Investigator, and was a close collaboration with the laboratory of Jonathan Weissman at the Whitehead Institute at MIT. A paper describing the study appears in the journal Science on October 21.

A mitochondria is an organelle within a cell that produces energy and acts as a cellular signaling hub. The outer membrane of the mitochondria facilitates multiple processes, such as helping the cell recognize pathogens, initiating a self-destruct process called apoptosis, and the breakdown of brain signaling molecules such as dopamine.

The outer membrane is embedded with hundreds of proteins, each inserted into the membrane in a precise orientation. If these proteins are not successfully inserted, the mitochondria are unable to function properly, leading to a wide range of disorders. One class of proteins, known as alpha-helical proteins, represent more than 90 percent of the different types of proteins in the mitochondrial outer membrane. Despite their importance, the way in which they get inserted into the membrane has long puzzled researchers.

The new research from the Voorhees and Weissman laboratories determines that a protein—MTCH2—is responsible for inserting alpha-helical proteins into the mitochondrial outer membrane in their correct orientation. The team discovered MTCH2's role by conducting a massive screen of genes in human cells. The researchers then used a wide range of different experiments to show that MTCH2 is both necessary and sufficient to carry out the insertion process. 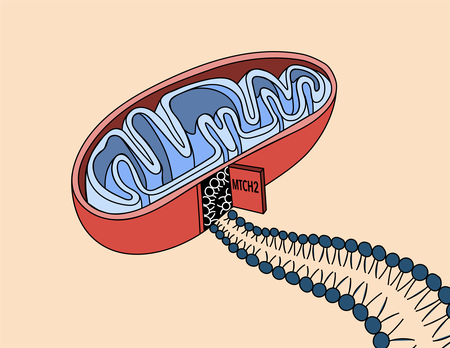 Artist illustration of the MTCH2 protein acting as a facilitator for protein insertion into the mitochondria. Credit: Maria Guna 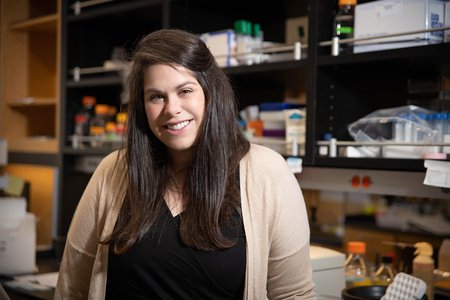