How Stem Cells Choose their Careers

"What do you want to be when you grow up?" is a question it seems like every child gets asked. A few precocious ones might answer "a doctor" or "an astronaut," but most will probably smile and shrug their shoulders. But well before a child could comprehend the question or the concept of choosing one's own path in life—while they were an embryo, in fact—the child's own stem cells were asking themselves the same thing. Stem cells are cells that have not yet chosen a specialized fate, such as to become a neuron, or white blood cell. At some point, each stem cell decides what it will be when it "grows up," and these decisions are critical junctures in any organism's development.

In the laboratory of Marianne Bronner, Albert Billings Ruddock Professor of Biology and Biological Engineering, researchers focus on a particular population of stem cells, called the neural crest, which is found along the organism's head-to-tail axis. These cells have the ability to differentiate into heart muscle, parts of the facial skeleton, and other tissue types. Now, using chick embryos, a team of researchers from the Bronner laboratory have discovered how a gene called Hmga1 helps the formation of neural crest cells in the early embryo.

A paper describing this research appears in the journal eLife. Graduate student Shashank Gandhi is the paper's first author.

Every cell in a developing embryo contains a copy of the organism's entire genome—a massive amount of information in the form of genetic material. The genome contained within each cell is the complete instruction manual to build and maintain the function of the whole organism. Within this instruction manual there are chapters of genes, such as "How to Become a Neuron," and "So You Want to be a Muscle."

Depending on what the cell chooses, it must follow specific programming and processes.

The protein HMGA1 (encoded for by the Hmga1 gene) helps the cell initiate these processes, turning on or off various other genes as needed. In this new research, the team found that HMGA1 plays two unique roles at different points in an embryo's development.

First, the team discovered that HMGA1 is necessary for controlling expression of a gene called Pax7, which, the Bronner lab had previously shown, is necessary for the formation of neural crest cells; without this gene, cells turn into central nervous system cells instead.

After they form, neural crest cells need to be able to migrate away from the central line of the body where they originate, called the neural tube, to other parts of the embryo, such as the heart and the face. In this new study, the team discovered that HMGA1 also regulates a gene called Wnt1, which is known to control the ability of neural crest cells to separate correctly from the neural tube to begin their migration.

Interestingly, while this research shows that Hmga1 is necessary for healthy embryonic development, the gene has separately been implicated in cancers such as melanoma and neuroblastoma. "Many of the genes that are turned on in development are redeployed in cancer in an abnormal way," says Bronner, who is also the director of Caltech's Beckman Institute. "We've seen that the process through which neural crest cells become migratory is actually similar to how cancer cells undergo metastasis."

"When these things go wrong, you get birth defects," says Bronner. "The thing I find so fascinating is that the embryo is a self-assembling system. Studying factors like HMGA1 is exciting because it's possible that small mutations in these factors at such early stages could be enough to change the balance and cause issues for the adult person far in the future. The system is robust and can self-correct and the embryo can still develop, but maybe that person is more prone to getting melanoma, or other types of cancer. It's complicated, but only because we don't understand it fully. Every little piece of research adds to completing the puzzle."

"What I find amazing about this particular system is that the embryo has evolved a way to use the same gene to do two distinct functions, which are both equally important for neural crest development," says Gandhi. "Our findings would not be possible without the technology from and collaboration with the Single Cell Profiling and Engineering Center of the Beckman Institute."

Gandhi notes that this paper began as part of a Summer Undergraduate Research Fellowship (SURF) project for Caltech undergraduate Krystyna Maruszko, who is also captain of the Caltech Women's Volleyball team. "Krystyna was only a freshman when she started working on this project. She secured a SURF twice, and even worked hard in the lab during the school year, and now we have a beautiful scientific story that came out of the project," he says. "The Caltech SURF program is an amazing opportunity, and I encourage all undergraduates to take advantage of it during their time here at Caltech."

The paper is titled "Bimodal function of chromatin remodeler Hmga1 in neural crest induction and Wnt-dependent emigration." In addition to Gandhi, Maruszko, and Bronner, co-authors are senior postdoctoral scholar research associate Erica Hutchins, Research Technician Associate Jong Park, and Assistant Professor of Computational Biology Matthew Thomson. Bronner and Thomson are both affiliated faculty members with the Tianqiao and Chrissy Chen Institute for Neuroscience at Caltech. Funding was provided by the National Institutes of Health and the American Heart Association. 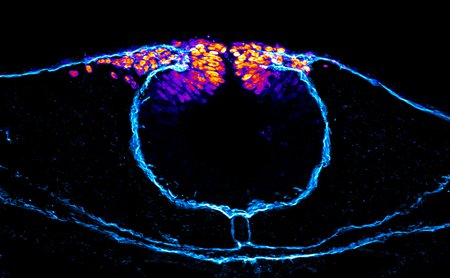 Neural crest cells (purple / magenta / orange) are unable to migrate through a blocked laminin channel (cyan) caused by a reduction in Wnt signaling on the right side of the dorsal neural tube. Credit: Gandhi et al., eLife, 2020
Image Lightbox
Subscribe
The Caltech Weekly