The Neurobiology of Emotional Behavior

Research interests in my laboratory focus on understanding how emotional behavior is encoded in the brain, at the level of specific neuronal circuits, and the specific neuronal subtypes that comprise them. We want to understand the structure and dynamic properties of these circuits and how they give rise to the outward behavioral expressions of emotions such as fear, anxiety or anger. This information will provide a framework for understanding how and where in the brain emotions are influenced by genetic variation and environmental influence ("nature" and "nurture"), and may someday lead to improved drugs to treat psychiatric disorders such as depression. We are using both mice and the vinegar fly Drosophila melanogaster as model systems. A central focus of the laboratory is on the neural circuits underlying aggression and fear. We are using molecular genetic tools, as well as functional imaging and electrophysiology, to establish cause-and-effect relationships between the activity of specific neuronal circuits and behavior. We hope that this research will lead to new insights into the organization of emotion circuits, and their dysregulation in psychiatric disorders.

Emotion circuits in the mouse brain

Research using the laboratory mouse Mus musculus focuses on understanding the neurobiology of fear, anxiety and aggression, and the interrelationships between the circuitry that processes these emotions.

Neurobiology of fear and anxiety

Our studies of fear are currently centered on the function of circuits in the amygdala, a medial temporal lobe structure that plays an important role in Pavlovian learned fear, a form of classical conditioning. We have identified genes that mark several subpopulations of neurons that form a dynamic microcircuit within the central nucleus of the amygdala (Haubensak et al., 2010). The function of this microcircuit in fear behavior is being dissected using optogenetic tools, such as channelrhodopsin, and pharmacogenetic tools, such as the ivermectin-gated glutamate sensitive chloride channel (GluCl) (Lerchner et al. 2007), together with acute slice electrophysiology and genetically based anatomical tracing of synaptic pathways. More recent studies have applied optogenetic approaches to dissecting the neural circuitry of the lateral septum, a relatively under-studied structure that plays an important role in the control of stress-induced anxiety, as well as neurons in the hypothalamus that control innate fear. 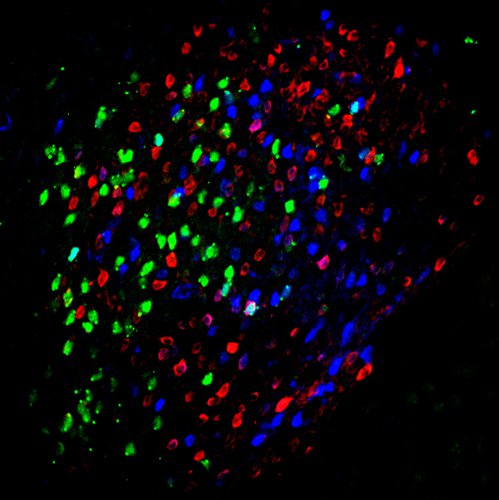 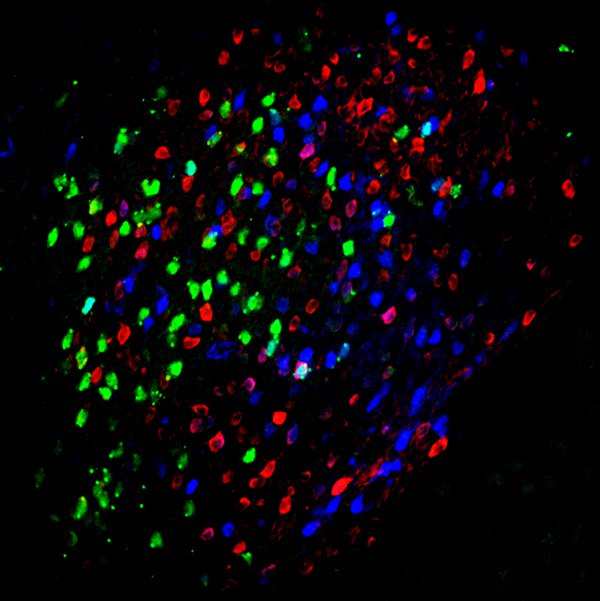 Aggression is a naturally occurring, instinctive social behavior, but pathological violence takes an enormous toll on human society. Yet the neurobiology of aggressive behavior is tremendously understudied by comparison to other emotional and affective behaviors, such as fear and anxiety. It has been known for almost a century that electrical stimulation of certain regions of the hypothalamus can elicit attack behavior. However the identity of the neurons responsible for this behavior, their precise location, connectivity with other brain regions, and their relationship to neurons mediating other social behaviors, such as mating, are unknown. Furthermore, most such studies have been performed in cats and rats, limiting the applicability of genetic tools. We have recently shown that optogenetic stimulation of neurons in the ventromedial hypothalamic nucleus (VMH), using a virally expressed channelrhodopsin-2 (ChR2), can evoke attack in male mice that is time-locked to the light stimulus, not only towards a female (which is normally never attacked), but also towards an inanimate object such as a latex glove. Interestingly, electrophysiological recordings in awake behaving mice indicate that VMH contains intermingled populations of neurons that are involved in either male-male aggression, or male-female mating. Our current studies have identified molecular markers for attack neurons, opening the way to mapping the circuitry through which these neurons influence aggressive behavior, and their relationship to neurons controlling mating. These studies should lead to a better understanding of how internal states, such as arousal or motivation, are translated into behavioral action-selection ("decision-making").

The pioneering work of the late Seymour Benzer proved that the powerful genetics of Drosophila can be used to dissect the genetic underpinnings of many types of complex behaviors. Until recently, however, it was not clear whether this model system could also be applied to understanding the neurobiology of emotion and affect. We are taking two complementary approaches to determine the extent to which this is possible, and if so what we can learn from it. One approach is to dissect the neural circuitry underlying behaviors that are analogous to defensive behaviors in higher organisms, such as aggression (Wang et al., 2008; Wang and Anderson, 2009). The other is to model internal states or processes that are fundamental to many types of emotional responses, such as arousal, to ask for example whether arousal is unitary, or whether there are different types of behavior-specific arousal states (Lebestky et al., 2009). In both cases, we are developing novel behavioral assays, as well as machine vision-based approaches (Dankert et al., 2009) to automate the measurement of these behaviors (in collaboration with Pietro Perona, Allen E. Puckett Professor of Electrical Engineering), and are using molecular genetic-based tools to image and perturb neuronal activity in order to identify the specific circuits that mediate these behaviors.