The Meyerowitz lab is working to understand how plants grow and develop. Much of this work is directed to the shoot apical meristems of flowering plants – the collection of stem cells at the tip of each branch that is the source for the cells that make stems, leaves, and flowers. It is an impressive nanomachine, and not only because it is a self-organizing collection of cells that creates, from a rudiment a fraction the width of a hair, the entire above-ground part of plants, such as our experimental organism Arabidopsis thaliana, but also giant oaks and redwoods. It is also impressive in its importance for human welfare. At least 80% of all human food, such as rice and wheat, is made by shoot apical meristems; and the balance of carbon dioxide and oxygen in the atmosphere is controlled by leaves, which are also shoot meristem products. We need to understand shoot apical meristems to feed the world, and to ameliorate the effects of climate change. 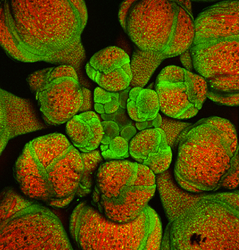 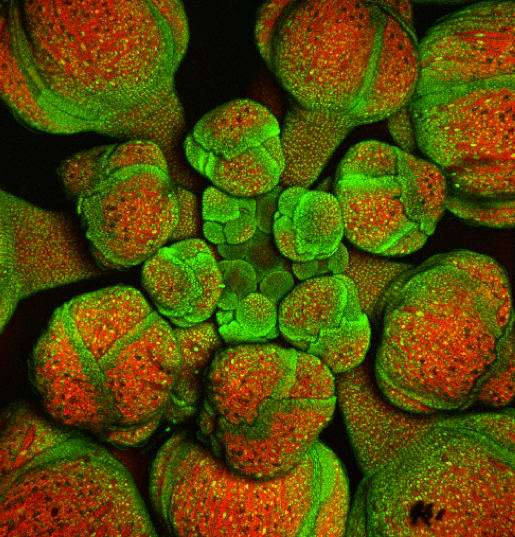 Though only a few hundred cells in size, the shoot apical meristem has a large number of overlapping but different domains of gene expression. These gene expression domains are dynamic – some genes change their expression relative to appearance of new leaf or flower primordia. Others are expressed in what appear to be stable domains in the meristem – but are not stable, as the cells that express the genes are dividing, and some progeny cells enter these domains as others depart, making them dynamic at the cellular level, even though stable in comparison to the meristem boundaries. How are these gene expression patterns controlled? By iteration between computational models of cell-cell interactions, and experiments to test the models, we have developed robust hypotheses for flower primordium-influenced gene expression that involve interactions between chemical (auxin) and mechanical signals in the meristem. These hypotheses have explained in detail the origin of phyllotactic patterns – the patterns of leaves and flowers around stems that are familiar both for their regularity and beauty, as in pinecones or sunflowers, but also for their mathematical connections to Fibonacci numbers. For meristem region-specific expression we have models where cell-cell communication is mediated by a combination of small-molecule (cytokinin) and peptide signals.  In the course of our work on meristems we have discovered the roles of peptide hormones in plant development. These have turned out to be the predominant class of plant hormones, unsuspected a few decades ago. We also have developed live-imaging and computational modeling methods that are now widely used, and have discovered the interconnected feedbacks of mechanical and chemical signaling in plant tissues.

One remarkable aspect of shoot apical meristems is that, while they ordinarily form during embryogenesis (to make the primary shoot), or in the axil of each new leaf (thus creating branches), they also will form de novo from cells cultured from any living part of the plant – an amazing example of plasticity and stem cell activity. Through studies of plant regeneration and plant grafting we are beginning to achieve a mechanistic understanding of self-organization of living material that has implications for all stem cell research, including that in humans.