Memories are stored in the brain as connected neurons "encoding" simultaneous events and impressions. Activation of one of the connected neurons can lead to activation of all of them. Formation of new memories requires the formation of new connections among neurons. One way the brain accomplishes this is to strengthen synapses among neurons that fire together during an event.

Synapses are strengthened in response to their own activation by a process termed "synaptic plasticity." Our brains have evolved complex mechanisms for controlling the circumstances under which such changes occur. For example, one of the receptors for the excitatory amino acid neurotransmitter glutamate (the NMDA-type glutamate receptor), is able to trigger a long-lasting increase in the strength of a synapse, but only when simultaneous activation of several synapses on the same neuron causes the postsynaptic neuron to fire an action potential. In other words, "neurons that fire together, wire together." This "plasticity rule" is used to form memories. Synaptic plasticity occurs because activation of the receptors initiates biochemical changes in the signaling machinery located at the presynaptic and postsynaptic sites. The biochemical changes can either increase or decrease the size of the signal produced by the synapse when it fires again.

Our lab has studied the signal transduction machinery that controls synaptic plasticity in central nervous system synapses. In past years, we employed a combination of microchemical and recombinant DNA methods to decipher the molecular composition of a scaffolded network of signaling enzymes located near the postsynaptic membrane of excitatory synapses in the CNS, and called the postsynaptic density (PSD). This network controls the cellular changes that occur to strengthen or weaken synapses. For example, enzymes located in the PSD regulate insertion and removal of glutamate receptors and elaboration of the postsynaptic actin cytoskeleton that underlies the shape of postsynaptic spines.

Recently, we set out to study the postsynaptic signaling network as a system in order to learn how it regulates the delicate mechanisms of synaptic plasticity. This work has involved an interplay between spatially accurate computer simulations of biochemical reactions in the postsynapse, and experiments to test the accuracy of simulations and to help us build new models. We are building computer simulations as part of a long-standing collaboration with Terry Sejnowski and Tom Bartol of the Salk Institute. Our experiments have involved a wide array of techniques including in vitro enzymatic assays with purified proteins, cellular pharmacology and electrophysiology with intact neurons, construction of mutant mice by homologous recombination, and mass spectrometric assays of protein phosphorylation in vitro and in vivo.

A PSD protein termed synGAP that was discovered several years ago by our lab has recently been found by human geneticists to be responsible for a relatively common form of non-syndromic intellectual disability. Individuals with only one working copy of the synGAP gene (synGAP haploinsufficiency) have severe intellectual disability often accompanied by autistic symptoms and/or epilepsy. Over the past year we showed that synGAP has two unrelated functions in the PSD regulatory network. Phosphorylation of synGAP by regulatory protein kinases shifts the specificity of its inactivation of two distinct regulatory "GTP-binding proteins", Ras and Rap. The balance between active Ras and Rap controls the rate of addition of new glutamate receptors to the synapse. Thus, synGAP phosphorylation during induction of synaptic plasticity has a potent influence on the rate of addition of new receptors to the synaptic membrane. Independently, phosphorylation by a similar set of enzymes reduces the binding affinity of the C-terminal tail of synGAP for protein "slots" in the PSD that immobilize glutamate receptors and hold them in the postsynaptic membrane. Thus, more "slots" are made available to bind and immobilize receptors. Disruption of this delicate, precisely controlled regulation of the number of transmitter receptors at excitatory synapses likely underlies symptoms of synGAP haploinsufficiency. 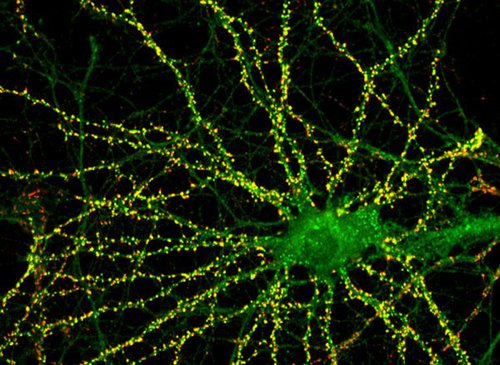 Localization of postsynaptic proteins in a cultured neuron by immunocytochemistry. Antibodies to the synapsin are labeled red. Antibodies to PSD-95 are labeled green. Both proteins are concentrated in the yellow patches along the dendrites.
Image Lightbox 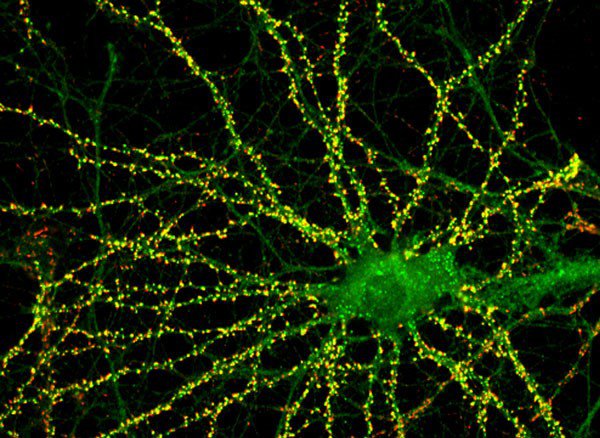 Localization of postsynaptic proteins in a cultured neuron by immunocytochemistry. Antibodies to the synapsin are labeled red. Antibodies to PSD-95 are labeled green. Both proteins are concentrated in the yellow patches along the dendrites.
Download Full Image