Immunologic and neurologic imbalances underlie many diseases. The human body represents a scaffold upon which multitudes of commensal species build
residence, creating a diverse ecosystem with members of five of the six kingdoms of life. Mechanisms that mediate the interdependent and complex interactions between the microbiome and animals, as well as their influences on human health, represent an exciting frontier of science and medicine. Our laboratory aims to discover how gut bacteria influence the development and function of the immune and nervous systems, with the goal of understanding mechanisms by which the microbiome contributes to the critical balance between health and disease. 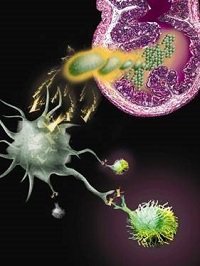 The gastrointestinal (GI) tract is home to hundreds of bacteria, and recent evidence suggests that the microbiome regulates both pro- and anti-inflammatory immune responses in the gut. At the time this paper was published, no experimentally validated microbes that ameliorate gut inflammation had been reported, though the concept of beneficial bacteria was speculated over a hundred years ago. Inflammatory bowel disease (IBD) is a severe disorder in humans caused by uncontrolled intestinal immune responses. The incidences of IBD have dramatically increased over the past decades, and safe and effective therapies are desperately needed. A role for gut bacteria during disease is clinically, epidemiologically and experimentally well documented. However, the cellular and molecular contributions of the microbiome to the etiology of IBD are largely unknown. Our lab's studies have shown that Bacteroides fragilis, a prominent bacterium of the human microbiota, mediates protection from experimental IBD in laboratory animals. Furthermore, we identify that a specific immunomodulatory molecule (PSA; Polysaccharide A) of B. fragilis is required and sufficient for suppressing intestinal inflammation and preventing disease in preclinical colitis models. PSA induces robust anti-inflammatory responses in animals, which are necessary for its protective activity. In particular, PSA networks with the host immune system to induce interleukin-10 (IL-10) producing CD4+ T cells that mediate protection from colitis. Our seminal report demonstrates that beneficial bacteria have evolved symbiosis factors that may represent an entirely novel class of therapeutics for IBD. Overall, these studies described the first experimental evidence for how the microbiome regulates cellular and molecular pathways in animal models, and several laboratories have now identified other immunomodulatory gut bacteria. We have deeply defined many aspects of PSA's mechanisms of action, and de-risked its development as a clinical candidate currently being developed for human trials. 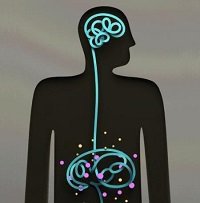 Commensal bacteria influence a variety of complex behaviors, including social, emotional and anxiety-like behaviors, and contribute to brain development in mice and neuronal activation in humans. However, specific connections between the gut and the brain that impact neurologic function remain poorly described. Autism spectrum disorder (ASD) is a neurodevelopmental disease that affects 1 million children and their families, and is characterized by cardinal symptoms including repetitive behaviors, impaired communication and abnormal social interactions. The diagnosis of ASD is increasing at an alarming rate, suggesting a possible role for the environment and making ASD one of the most significant medical and social burdens of our time. Intriguingly, studies report that children with ASD exhibit characteristic changes in their gut microbiomes. Using a validated mouse model that displays the core symptoms of ASD, we show that animals with behavioral deficits also exhibit an altered gut microbiome and increased intestinal permeability, similar to features reported in humans. Remarkably, treatment with a specific probiotic from the human microbiome reduces ASD-related anxiety and improves communicative, stereotyped and sensorimotor abnormalities. Consistent with the role of gut microbes in regulating intestinal permeability and metabolic homeostasis, we show that probiotic treatment corrects the altered metabolite profiles of "autistic" mice. In a proof-of concept test, we reveal that injection of one identified metabolite into naïve mice is sufficient to induce anxiety-like behavior. This data suggests that the microbiome regulates metabolomic changes that contribute to behavioral abnormalities. We propose the provocative concept that ASD may be a disease of the gut that manifests in altered behaviors that are at least partially mediated by bacterial metabolites. This research provides molecular insights into the emerging notion that gut-brain connections impact neurodevelopmental disorders, and that targeting intestinal symptoms via microbiome modulation may represent revolutionary treatment options for autism. 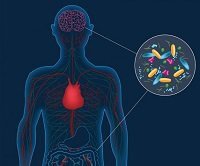 Behavioral, psychiatric, and neurodegenerative disorders often display hallmark neuropathologies within the central nervous system (CNS). Amyloidosis results from aberrant aggregation of specific neuronal proteins that disrupt many cellular functions. Neurodegenerative amyloid disorders, including Alzheimer's, Huntington's, and Parkinson's diseases (PD), are each associated with a distinct amyloid protein. Aggregation of a-synuclein (aSyn) is thought to be pathogenic in PD, the second most common neurodegenerative disease in the US affecting 1 million people and 1% of the population over 60 years of age, with often-debilitating motor symptoms including tremors, muscle rigidity, and impaired gait. PD is a multifactorial disorder that has a strong environmental component, as less than 10% of cases are hereditary. Although neurological diseases have been historically studied within the CNS, peripheral influences have been implicated in the onset and/or progression of diseases that impact the brain. Indeed, emerging data suggest bidirectional communication between the gut and the brain in anxiety, depression, nociception, and autism spectrum disorder (ASD), among others. Research into how the gut-brain axis influences neurological conditions may reveal insights into disease etiology. Based on the common occurrence of gastrointestinal (GI) symptoms in PD, dysbiosis among PD patients, and evidence that the microbiota impacts CNS function, we tested the hypothesis that gut bacteria regulate the hallmark motor deficits and pathophysiology of disease. We discovered that the microbiota is necessary to promote aSyn pathology, neuroinflammation, and characteristic motor and non-motor features in a validated mouse model. We identify specific microbial metabolites that are sufficient to promote disease symptoms. Remarkably, fecal microbes from PD patients impair motor and GI function significantly more than microbiota from healthy controls when transplanted into mice. Together, these results suggest that the gut microbiome may play a critical and functional role in the pathogenesis of neurodegenerative disease.