How Fruit Flies Sniff Out Their Environments

Fruit flies—Drosophila melanogaster—have a complicated relationship with carbon dioxide. In some contexts, CO2 indicates the presence of tasty food sources as sugar-fermenting yeast in fruit produces the molecule as a by-product. But in other cases, CO2 can be a warning to stay away, signaling an oxygen-poor or overcrowded environment with too many other flies. How do flies tell the difference?

Now, a new study reveals that fruit fly olfactory neurons—those responsible for sensing chemical "smells" such as CO2—have the ability to talk to each other through a previously undiscovered pathway. The work provides insights into the fundamental processes by which brain cells communicate with one another and also gives new clues to solving the longstanding mysteries about fruit flies and CO2.

The research was conducted in the laboratory of Elizabeth Hong (BS '02), assistant professor of neuroscience and Chen Scholar of the Tianqiao and Chrissy Chen Institute for Neuroscience at Caltech. A paper describing the study appears in the journal Current Biology on September 6.

"CO2 is an important but complex signal found in all sorts of different situations in the natural environment, and it illustrates a core challenge neurobiologists face in understanding the brain: How does the brain process the same sensory signal in different contexts to allow the animal to respond appropriately?" says Hong. "We tackle this question using the fly olfactory system, one of the best-studied and well-characterized sensory circuits. And even still, with this research, we discovered a surprising new phenomenon in how the brain processes sensory signals."

Olfaction, or the sense of smell, was the original sensory system to evolve in all animals. Though humans are primarily visual, the majority of animals use olfaction as the main method of understanding their environments: sniffing out food, avoiding predators, and finding mates. Fruit flies are a particularly manageable model for understanding the biological mechanisms underlying the sense of smell: a fruit fly only has about 50 different odorant receptors, whereas a human has around 400 to 500, and mice have more than a thousand.

A fly's "nose" is its two antennae. These antennae are coated with thin hairs called sensilla, and inside of each sensillum are the olfactory neurons. Odors—like CO2 or the volatile esters produced by rotting fruit—diffuse into tiny pores on the sensilla and bind onto corresponding receptors on the olfactory neurons. Neurons then send signals down the sensillum and into the brain. Though we don't have antennae, an analogous process happens in your own nose when you lean in to catch a whiff of delicious cooking or recoil from bad smells.

In fruit flies, while most odors activate around 20 different types of sensory neurons at once, CO2 is unusual in that it only activates a single type. Using a combination of genetic analysis and functional imaging, researchers in the Hong laboratory discovered that the output cables, or axons, of the CO2-sensitive olfactory neurons actually can talk to other olfactory neural channels—specifically, the neurons that detect esters, molecules that smell particularly delicious to a fruit fly.

However, this olfactory crosstalk depends on the timing of CO2 cues. When CO2 is detected in fluctuating pulses, such as a wind-borne cue from a distant food source, the CO2-sensing olfactory channel sends a message to the channels encoding esters, signaling to the brain that delicious food is upwind. However, if CO2 is continually elevated in the local environment, for instance from a rotting log, this crosstalk is quickly shutoff, and the CO2-sensitive neurons signal directly to the brain to avoid the source.

This is the first time that olfactory neurons have been shown to talk to one another between their axons, processing incoming information before these signals ever reach the brain. The results cut against the prevailing dogma in neuroscience that information processing is limited to the integration of inputs by neurons; the new findings show that signals are reformatted at the output end as well.

The scientists also discovered that how flies behave toward CO2 also depends on the timing of CO2 signals. "We found that the behavior of the animal is affected by the temporal structure of the CO2 signal," says Hong. "When the fly walks into a cloud of elevated CO2, it tends to turn away from the direction it was traveling. But in an environment where CO2 is pulsing, the fly will run upwind toward the source of the odor. This difference in how flies behave toward fluctuating CO2, versus sustained CO2, parallels the dependence of the crosstalk from the CO2-sensing neurons to attraction-promoting food-sensing neurons."

Understanding fruit fly olfaction, particularly with respect to sensing CO2, is a long-standing goal for Caltech researchers. Decades ago, researchers in the laboratory of David Anderson— Seymour Benzer Professor of Biology; Tianqiao and Chrissy Chen Institute for Neuroscience Leadership Chair; Investigator, Howard Hughes Medical Institute; director, Tianqiao and Chrissy Chen Institute for Neuroscience—discovered that flies avoid CO2 as a chemical indicating an overcrowded environment. But recently, researchers in the lab of Michael Dickinson—Esther M. and Abe M. Zarem Professor of Bioengineering and Aeronautics and executive officer for Biology and Biological Engineering—discovered that flies can also be attracted to CO2, when using it to sniff out a source of food.

"Our work builds on these prior studies and provides one possible neural solution for how CO2 could be triggering opposing behaviors in flies in varying contexts. It has been a highlight of having my lab at Caltech to have the opportunity to directly interact with David's and Michael's labs and discuss the connections between our work and theirs," says Hong.

The next major question is to understand how these parallel olfactory axons are talking to one another. The team ruled out most forms of classical chemical transmission that neurons use to communicate, and the mechanisms by which olfactory neurons are able to send and receive messages between their axons are mysterious. Solving this problem may provide new insights into how animal brains detect and process sensory information. 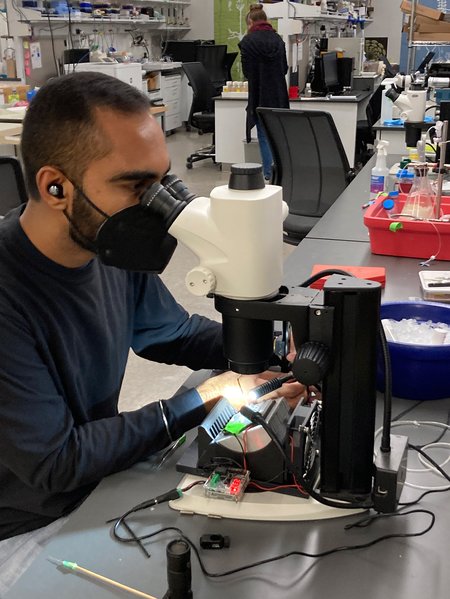 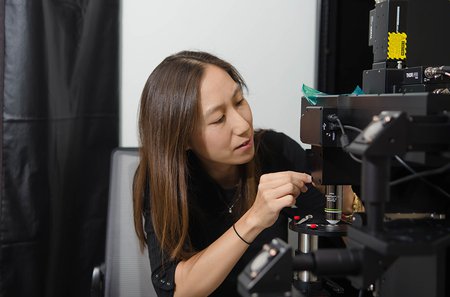 Betty Hong (BS '02), assistant professor of neuroscience and Chen Scholar of the Tianqiao and Chrissy Chen Institute for Neuroscience at Caltech, in the laboratory. Credit: Lance Hayashida/Caltech 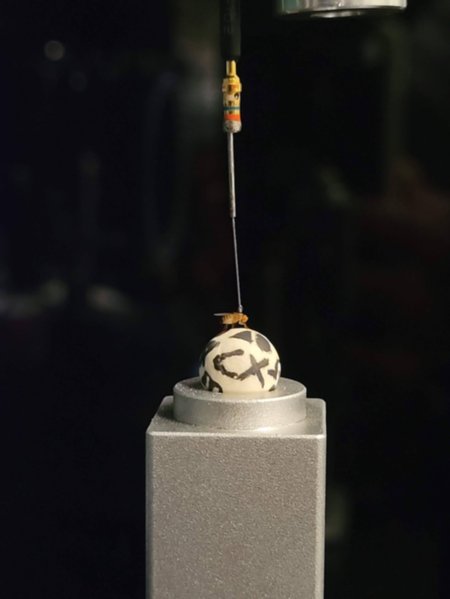 A fly is tethered in place but still retains the ability to freely move around a spherical "treadmill." Researchers simultaneously can activate and record brain activity from the fly as it moves and behaves. Credit: Courtesy of the Hong lab
Image Lightbox
Subscribe
The Caltech Weekly